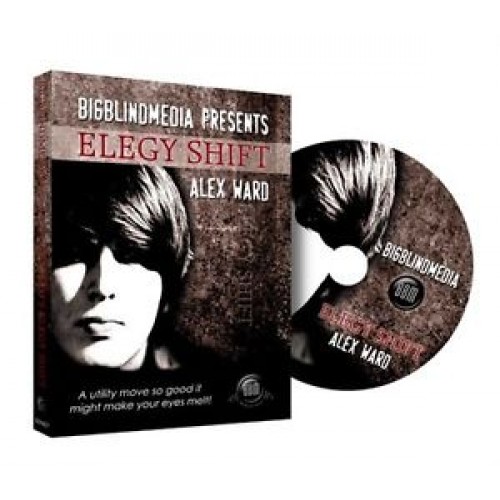 Super sneaky Alex Ward (you may remember him from such films as a Sealed, has finally tipped his top secret work on the underground ELEGY SHIFT (after much poking with sticks).
Imagine a move that enables a signed selection to visibly rise through the rest of the deck, even though it is out-jogged and in PLAIN VIEW! Now imagine that the rest of the deck stays in exactly the same order. Now imagine that the move is NOT DIFFICULT! We repeat, NOT DIFFICULT!
Can you imagine a move versatile enough to do this, as well as control a card secretly? Or even a big bunch of cards? How about a visual sandwich effect where the spectators can actually and literally SEE the two sandwich cards narrowing down their choices until they catch the selection?
The full work on this devastating new move is fully explained in super detail on this brand spanking new DVD. (That's right I said spanking *giggle*.)
The ELEGY shift is one of those moves that once you have in your arsenal, is never going to leave - partially for the blockbuster applications on this DVD and partially for the ones that YOU will be creating for it. After all, this is a versatile monster!
As if that wasn't enough, the BONUS effect on this DVD will be in the repertoire of everyone EVERYWHERE very shortly. Alex's Ring Piece (which he repeatedly showed us during the filming session) is just astonishing. A borrowed ring is visibly pulled through the centre of your finger in an impromptu masterpiece that is SWEETER than a gingerbread mans chocolate coated bits.
THE ELEGY SHIFT  The only way is UP!