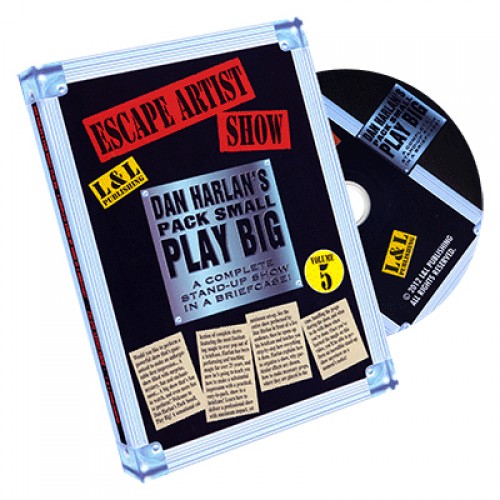 The Escape Artist Show on this volume features all of the excitement and compelling mysteries of escape work and packs it into a case that you can bring into any venue and perform it for audiences large and small. Though all of the effects center on the central theme of escapes, there's a wide variety of plots and methods in play that will captivate any group of spectators. The show starts with "Knot Tied," an amazing demonstration of knot releases using the most basic component of escape work - lengths of rope. First, you'll see Dan instantly tie a length of rope around his wrist and then be amazed as two lengths of rope, tightly tied together, melt apart. Finally, tied once more, the two pieces of rope visibly untie themselves seemingly at Harlan's will.

Next, with "Thumb Cuffs," Dan's hands are fastened together by spectators with not one but two pairs of daunting thumb cuffs. Hilarity ensues as Harlan not only escapes but manages to shackle his two assisting spectators together with the same cuffs. Then, "Hostage" brings this first section to a close. Though Dan's hands are tightly bound to his legs while in a sitting position, he is once again able to instantly free himself.

"Jacket Off" begins the next set of effects and utilizes a classic principle of magic in which a spectator's jacket, clearly threaded onto lengths of rope held in place by two spectators, is released completely unharmed. "Free Time" is an extremely visual escape from metal shackles and padlocks which gives the audience a real sense of déjà vu while, with "Thumb Tie," Harlan's thumbs are tightly tied together with two shoelaces by a spectator, yet he is able to pass a solid metal ring through the bonds and up his arms. He is even able to link himself to the spectator's locked arms yet, all the while, his thumbs are shown to be still tied together tightly and need to be cut apart at the effect's conclusion.

The spectator is the star in "Pull Through." Two lengths of ribbon threaded through rings and passed around a volunteer's waist are apparently pulled completely through her by two additional spectators. One can't reasonably call themselves an escape artist without presenting the classic strait jacket escape and in true Houdini fashion, "Dire Straights" pits Dan against a regulation jacket, but not without some comedic moments along the way. Finally, the show ends on a quiet yet powerful note with "Escape King," as a signed playing card is released from a ribbon with no visible signs as to how such a miracle could occur. Indeed, the card and ribbon are given away as a souvenir of a seeming impossibility.

The David De-Val Straitjacket by PropDog