Home » Search » A Show For All Seasons by Christopher T. Magician

A Show For All Seasons by Christopher T. Magician

From the author of the critically acclaimed and widely celebrated books Beyond Look, Don't See, Just for Fun, and Be More Funny!

No Christmas show? No Halloween show? No Library show? No problem! Everything you need to build your own fully themed show is here, divided into three fun to read sections: Four Lists, The Adapting Trick Collection, and Making It...

FOUR LISTS - Want to know one of the secrets of Christopher T. Magician's Success? Lists! And making your own themed show is as easy as making a few of them! Here, Christopher shares the four lists he compiles that automatically build the structure and outline for any themed show at all!

THE ADAPTING TRICKS COLLECTION - This Collection contains fourteen tricks that can easily be adapted and built around any theme! Christopher shares detailed method instructions along with tons of examples to get your creative juices flowing!

MAKING IT - Christopher gets in depth, providing step-by-step, detailed directions for building your own original adapted magic creations. All it takes is a little printing, cutting, and gluing, and you'll have tricks unique to you and your show!

Along with the theory, Christopher includes fourteen of his new favorite kid show routines, fully-scripted and totally interactive. Highlights include...

BIGGER SMILES - After displaying four pictures of frowny face emoji, the magician instructs the audience to rip the smiles right off their faces. Throwing the imaginary smiles to the stage, the frowny faces transform to smileys one-by-one!

POOH-POO - The magician leads the audience in a round of everybody's favorite game ... Pooh or Poo! A photo of Winnie the Pooh is mixed up with two emoji images. Pooh eventually disappears and reappears in a surprising and hilarious location!

APPLAUSE PLEASE - It's basically a torn and restored applause sign ... but so much more. This routine is guaranteed to draw in any audience and get them reacting and laughing. At the end, you're left with an effective running gag that continues to bring about laughter and applause throughout the show!

CANDLE TO PUMPKIN - This one routine is worth the price of admission. A picture of a candle vanishes in an attempt to light a Jack-O-Lantern on stage. Sadly, the pumpkin remains unlit. Much to the delight of the audience, the pumpkin is seen to light up every time the magician looks away! Including a highly adaptable trick every theme-show performer must own and a brilliant idea by magician Ken Scott, this one routine is not to be missed!

Let Christopher's oh-so-simple methods and ideas spark your own creativity, imagination, and craftiness, and in no time you'll truly have...

A SHOW FOR ALL SEASONS!

Princess in a Pickle by Silly Billy 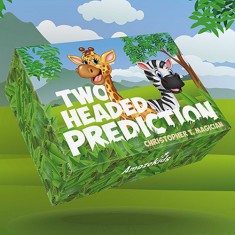 Paths to Enchantment by Malcolm Yaffe 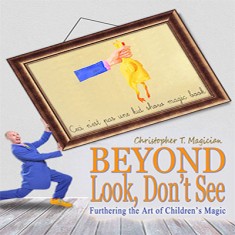