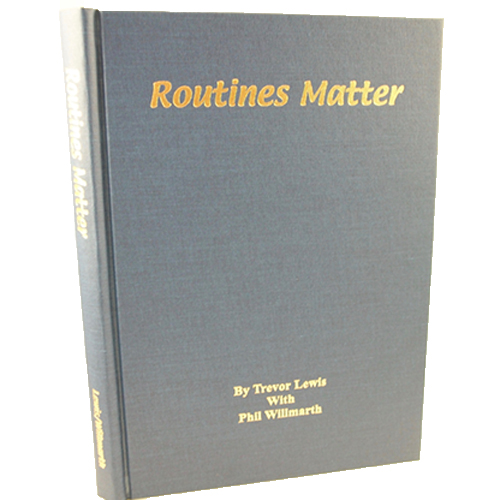 This amazing book presents 40 stand-up and close-up routines as used By Trevor in his adult club and close-up performances. Also includes a section on MC advice and material you can and will use. So much to choose from, as you delve into effects that are not only fun to perform, but have a big impact on your audience.

Trevor Lewis is an incredibly creative magician who has come up with many routines, presentations and gags that are suitable for any age group and almost every venue. This excellent collection features more than forty routines he has created for standard magic props and some unique creations. The book starts with a Trevor Lewis biography that chronicles his life and his magic career. Lewis is a general practitioner. Even though he is best known for his children's magic, he is also a FISM Card Magic champion and a thoroughly entertaining stage performer and Emcee with a unique talent for corny jokes, puns, and funny premises.

Trevor's Monte Plus, The Eleven Dollar Bill (a routine taught to him by Fred Kaps), Brema Ring Routine, Scotch Bag, The Eyes Have It, The Banana Routine, Trevor's Card at Any Number, Guilty/Not Guilty, and many others.

The book concludes with a chapter about Emceeing shows with patter, jokes, and advice.

"Routines Matter, a title to live by. I recently received a book in the mail that caused me a great deal of pleasure. Not just because of the content but also the very nature of the book. The author is Trevor Lewis with Phil Willmarth, and the name of the book is Routines Matter. Trevor Lewis is one of the United Kingdom's most versatile and entertaining performers. I remember how highly Ken Brooke thought of Trevor's work and the high esteem in which he held him. Phil Willmarth is a superb editor who cuts away anything that doesn't contribute to the book's theme and title. If you are looking for the latest one-handed center deal, then this is not your kind of book. Let's be honest -- there are already plenty (by which I mean too many) books and videos that can help you discover more and more variations on the physical technicalities of our art.
What is sorely lacking in most magic books is information about the actual structure and construction of successful tricks. There are many performers who just want to entertain a lay audience with some solid and entertaining magic, the kind of tricks you buy in the magic shop and combine into a solid show. This book is perfect for them. Trevor Lewis has a wonderfully sharp mind when it comes to pruning away the unnecessary from a trick. There is much to learn from his direct and uncluttered approach to taking a piece of magic and turning it into a routine. It reminds me a little of the wonderful (and outrageously underrated) books that Roy Johnson gave the magic world. Roy was a little more detailed in the descriptions of his tricks, but the similarity exists in the psychological strength of the routines.
You can read this book as a source of great ideas/bits/gags to make you a better and more entertaining performer. However, if you take a step back and explore the overview that it presents, you can learn an awful lot about the true art of seeing magic from a layman's viewpoint. In fact, I would suggest employing the mental exercise of translating the words as you read them from the page into a mental movie and try watching them in your mind's eye playing out to a real audience. Please don't think that I am underestimating some of the really smart and innovative technical magic contained in the book. As someone who has made a living for many years by linking finger rings, I was highly impressed by Trevor's handling. For the hundreds of magicians who have bought a Himber Ring and never used it, this is a great routine.
Looking at the list of routines that Trevor covers in his book is rather like reading a breakdown of my actual working material. Strong tricks that will impress an audience and make you a memorable performer. The real work on the real tricks, the stuff that has put my daughters through expensive university educations -- well, OK their scholarships helped.
I don't often take the time to recommend a magic book, but this one deserves the attention of anyone looking to improve the commercial smarts in their show."
- Nick Lewin

"It is rare I open a magic book that fights so aggressively against being pigeon-holed. The difficulty in crafting a review for this rarity is more than offset by my delight at discovering its contents. Routines Matter is the perfect-storm combination of a top production team given an outstanding product to produce. My first encounters with the Welch-born Trevor Lewis were through his wonderful 3-Card Monte move (from the June 1978 Apocalypse) and then later in his 1981 book, Trevor Lewis Close Up. During his many years as a magician, he has become an expert in close-up, cabaret, kid shows, and stage. (His variety of venues is demonstrated as early as the helpful table of contents where each item is labeled intimate, close-up, children/family, parlor, cabaret, or stage.) Lewis is one of those exceptional individuals who has developed true expertise in these areas while having the wisdom, discipline, and endurance to maintain a full-time career outside of magic.
So, we have a talented, creative, and prolific magician with a book full of material. Add to that the retired editor of The Linking Ring (and past president of the IBM) looking to launch a new venture producing products under the masthead, Willmarth Magic. Phil used his decades of experience as editor and author to prune, polish, add context to, and enhance the descriptions Lewis had been sending him for years. Then Phil drafted one of the top illustrators in the business, Tony Dunn, to help the already lucid text come to life.
What about the book itself? Physically, it is hardbound, 192 pages with 42 routines and 65 illustrations. The book opens with an introduction by Phil Willmarth and Foreword (cleverly disguised as a 'foreword') by Trevor Lewis. After the preliminaries, we leap right into My Magic Life, a 14-page autobiography told in an entertaining and interesting way. This is the perfect opener to the book, helping the reader to get to know a bit about the author.
Before moving to the routines, the editor offers a brief note I would echo here. In essence, the reader is alerted to the fact that he will read the routines exactly as performed by the originator. Lewis, like many of us, re-uses or recycles his lines if they fit in more than one routine. By pulling the routines out of the act and placing them on the printed page, you do not have the same context as the viewing audience. You may read the same line in two consecutive tricks, while a viewing audience would never hear the same line in the same show. (Knowing this, the reader receives an extra, unheralded lesson in how to milk the most from your lines.)
Without further ado, you are now authorized to delve into the meat of the book - the routines themselves. In addition to Lewis's original effects, you'll read his take on several classics: the Egg Bag, Eleven Bill Routine, Cards Across, Brainwave deck, Himber ring, and the Professor's Nightmare (to name just half a dozen). Each routine receives the Trevor Treatment, chocked full of lines and humorous segues. As Lewis points out early in the book, these routines are designed for his voice and I can vouch for their effectiveness having seen him work.
While you won't lift the routines in whole, you will find yourself collecting bits, pieces, tricks, and tweaks throughout the entire journey. The book is chocked full of all kinds of usable material and everyone will take something different from it than others in their neighborhood. During the process, you'll receive a crash course in how to customize your magic to fit you.
At the end of the book, you will get the author's advice on serving as a Master of Ceremonies. These 24 pages form a booklet within a book. In addition to advice, you'll find gags, lines, prop bits, and then of course, more lines.
In magic, it's not just what you do but how you do it. In this volume, you see how Lewis does it and has been doing it successfully for decades. Lewis is a working pro, FISM winner, president of the British IBM, successful lecturer, television star, author, inventor, and performer. This leads one to the obvious conclusion: Routines Matter.
Highly Recommended!"
- Steve Beam 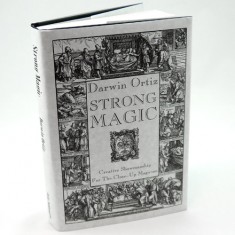 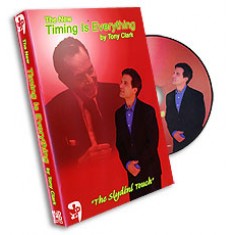 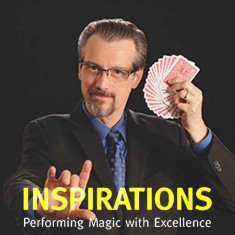 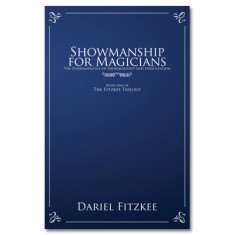 Showmanship for Magicians by Dariel Fitzkee

Stand Up Magic by Paul Romhany