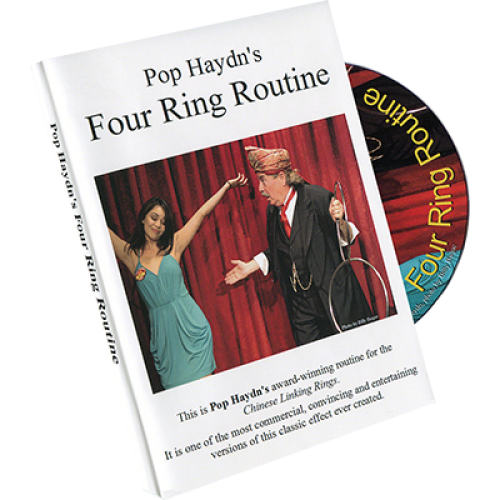 Pop Haydn is a past vice-president of the Magic Castle in Hollywood, as well as a six time award winner there for his performances in close-up, stage, parlor, and bar magic.

He has performed all over the world, and in every kind of performing venue-- including television, cruise ships, amusement parks, night clubs, theaters, restaurants, and private parties in the homes of celebrities.

Pop Haydn's Four Ring Routine was created in the 1960's when he was a street performer in New York City. It is one of the most commercial, convincing and entertaining versions of this classic effect ever created, and plays well in any type of performing situation.

Dia Vernon, the Professor said that this routine had "...the most original comedy premise he had seen in magic in over thirty years!"

In the routine, a spectator from the audience is invited up on stage to learn the "worlds oldest magic trick." The spectator quickly becomes the star of the performance as they seem to turn the tables on the magician and their two rings apparently link in their own hands, and then they try to keep up with the magician as he "teaches" them how to unlink and then to link them again.

The audience is in hysteric as the rings seem to link in every possible combination, and then melt apart "like rings of smoke", all the while the spectator desperately tries to keep up.

It is not a difficult routine to learn and perform, and it plays in the tightest of places completely surrounded, as well as on the biggest of stages. Pop explains every detail of performance and handling.