"David was filmed live at the Ibis hotel London, on March the 4th 1989. This 90 minutes long experience can't really be done justice to by words alone. I can honestly say I have never seen such high quality close-up material documented on one tape before! David has to rank amongst the top few close-up workers in the world, maybe even above those few!

On this tape you see his bending spoon routine from Opus magazine. A fork and spoon transposition that is pure magic. A table knife through cloth napkin that should have any restaurant worker frothing at the mouth. A torn and restored effect where even the creases in the card are finally ironed out. A signed card to pocket routine, where at the end the deck goes to the pocket leaving behind the signed card in your hand. This alone is a great climax, but even this is topped when you physically remove the signature from the card and return the used ink to your pen! This is followed by an ingenious wand and coins routine, a novel coin matrix, a pencil through coin routine, a ring on/off routine and then its back to the trusty pasteboards. David's method for Paul Harris Interlaced Vanish crosses the border of genius as does the same method applied to Spectator Cuts the Aces. He even explains one of his marked routines. The Cincinatti Prediction, which is a very clever Brainwave cum colour changing deck routine. You can make this up yourself for a few pence! The Fortune Telling Fish is laugh-a-minute routine with the psychic salmon, the tuned in tuna or was it the fortune telling flounder? Anyhow, it's a very commercial use for the old acetate fish, that due to body heat curls and flips on your hand. The selected card eventually turns up in the packet the fish was taken from! Next comes David's incredible cups and balls routine. Only two cups used but three large loads at the end. Words can't be describe the bewildering service of events that precede the loads so I won't try! Finally he explains his Striking Vanish, which has to be the most magical vanish of a coin or any small object you will ever encounter.

I make that about fifteen items, anyone of which is worth its weight in gold to the working close-up-entertainer. The entire one and a half hours simply flew by amidst the barrage of one liners, audience laughter and applause, not to mention an incredible display of skill and originality."
Stephen Tucker 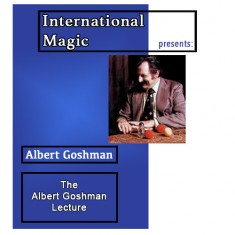 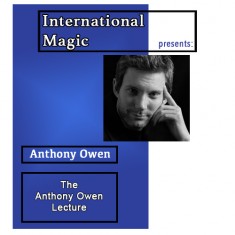