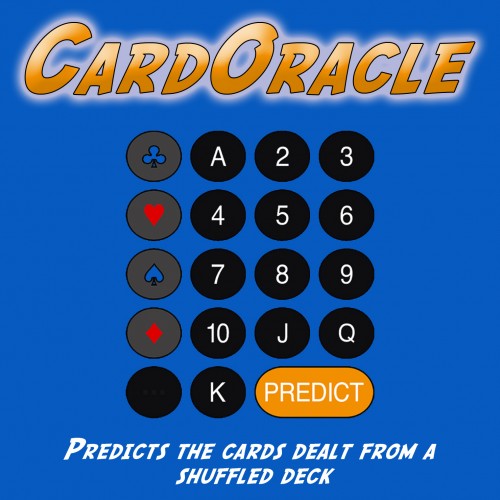 CardOracle isn't just a magic trick using a smart phone. It is not just a gadget either. It is a true professional routine that has mystified some of the most experienced magicians around the world... and, most of all, has completely baffled laymen.
CardOracle is able to predict which playing cards are dealt by the spectator... from a shuffled deck!

Phase 1:
A spectator freely shuffles the cards and removes any 5 at random, it is a completely free choice. One card is selected and put aside unseen. The other four are card values are entered into the CardOracle by the spectator. The CardOracle predicts the fifth card, which is then turned over for the first time. Amazingly the prediction is bang on. Note: You give your phone and an ordinary deck of playing cards to a spectator. They shuffle the cards, they freely choose the cards and they enter the card values into the CardOracle.

Phase 2:
The spectator then deals 4 cards face down, these are shuffled and one is placed aside. The remaining three cards are keyed into CardOracle in any order they wish. Once again, CardOracle makes a prediction as to what card has been placed aside, when the fourth card is turned over, it is the predicted card!

Phase 3:
The spectator turns over half the deck and shuffles once more. They freely choose 2 of the face-up cards and enter these in CardOracle. Yet again, CardOracle predicts without fail what card is next!

Final Phase:
An image of a deck of cards appears on the screen. The top card matches the one on the deck on the table - let's say it's the 3 of Spades. The deck is dealt through, and each time the CardOracle matches the next card. The CardOracle has managed to predict the order of the freely shuffled deck.

If you know someone who has seen the CardOracle performed 'live', you know how spectacular this routine is and how much of an impact it generates amongst audiences. This routine requires no prior knowledge of magic. You will find an easy to access secret menu with detailed and illustrated instructions as well as a video demo showing the entire routine performance.

“I’ve been open about hating Apps and ‘phone magic’. CardOracle fooled me and fooled me badly, but even better I was amused and highly entertained” - Alex (PropDog)

"You've got it wrong, you must be missing something out! What you've described to me just isn't possible!" - Luke O'Neill (ex-PropDog) 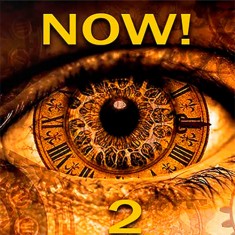 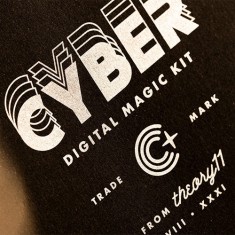 Cyber by Worm and Theory 11 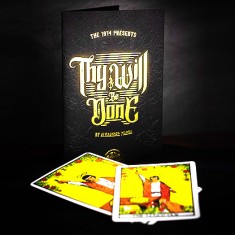 Thy Will be Done by Alexander Marsh and the 1914

iBalance Plus by Mark Elsdon 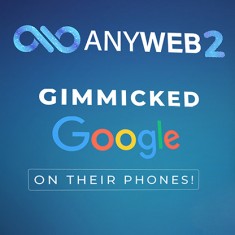